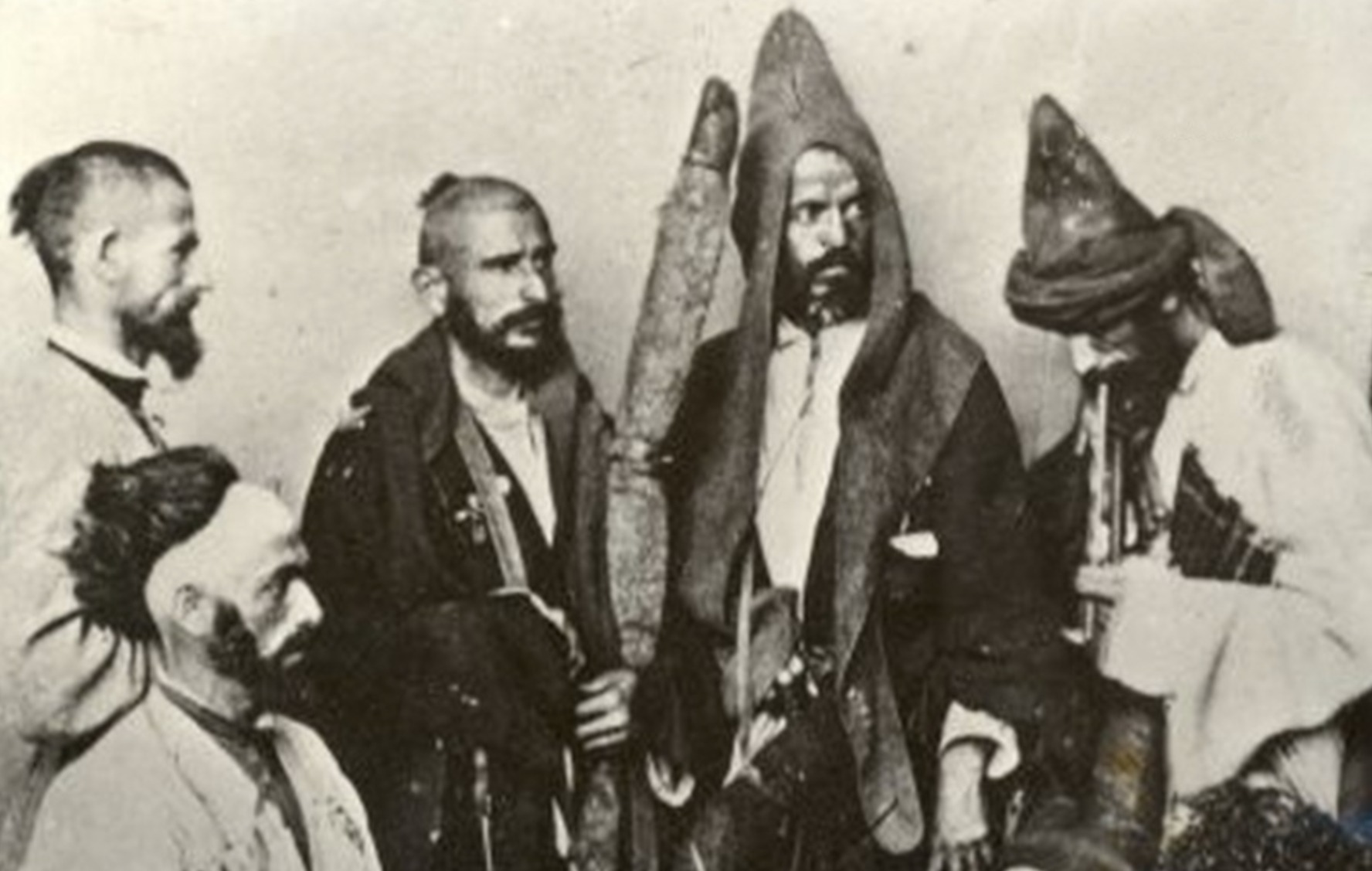 Droeba (Georgian: დროება, "the Times") was an influential Georgian political and cultural newspaper published in Tiflis from 1866 to 1885. 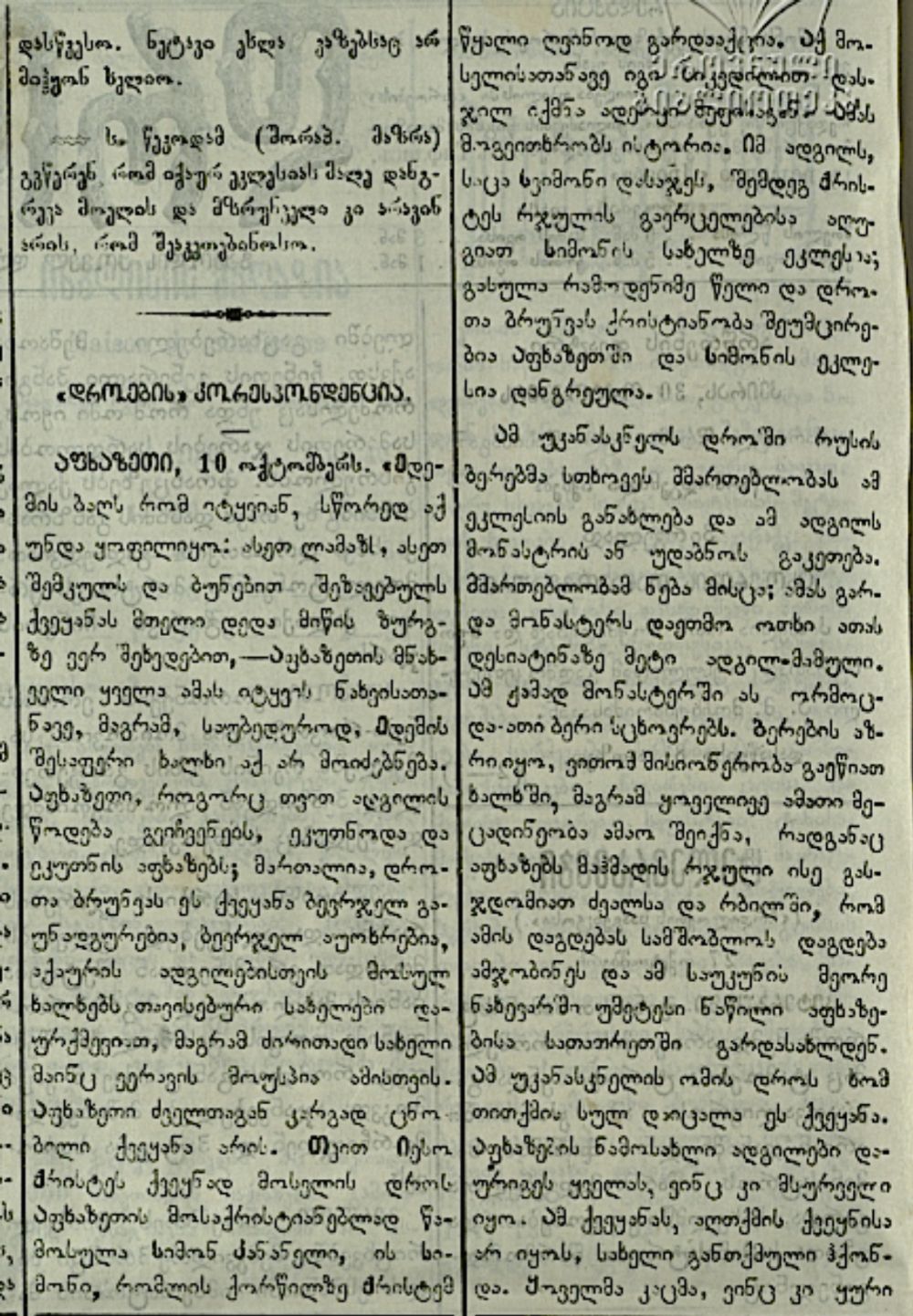 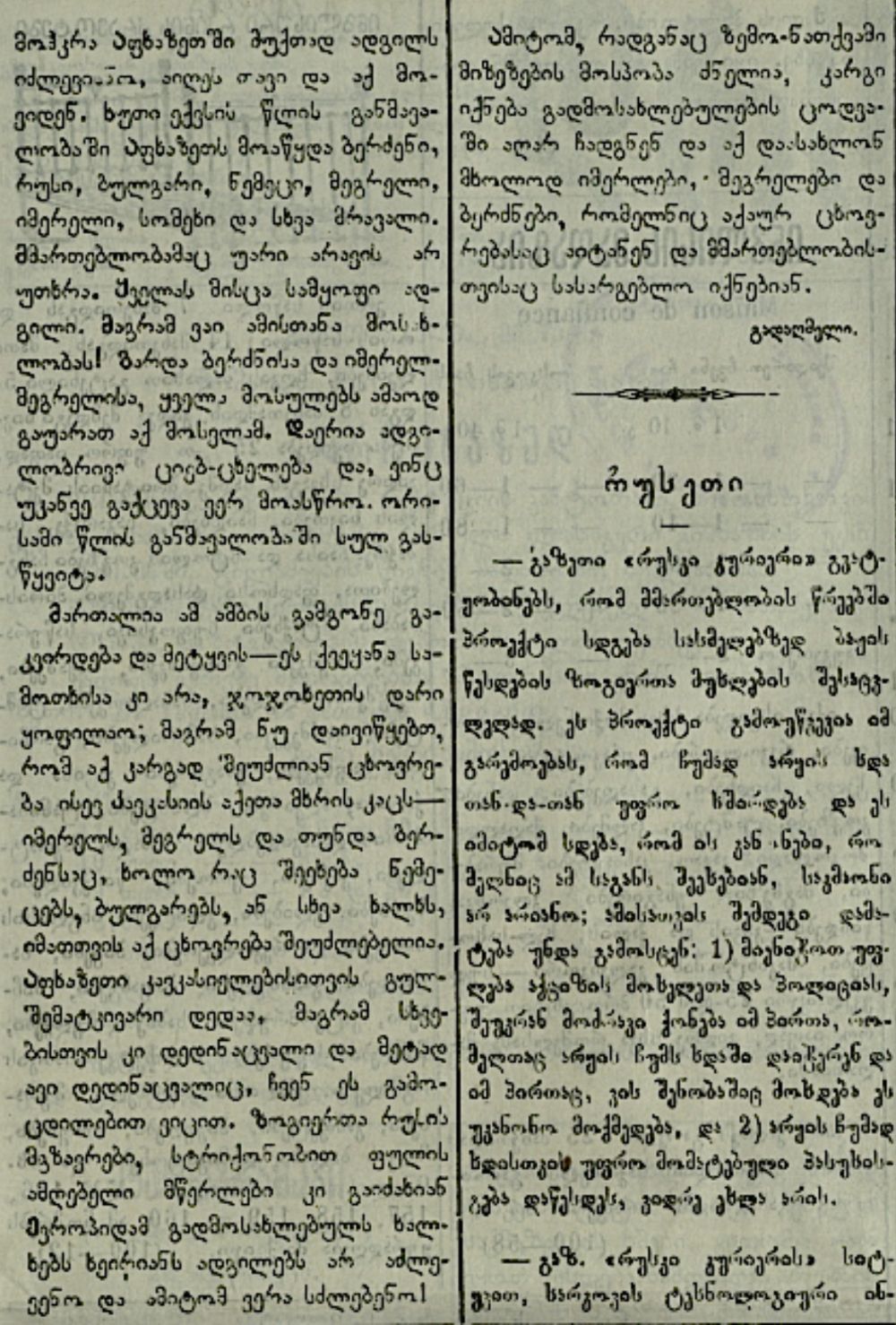 ABKHAZIA, 10 October. ‘The Garden of Eden of which folk speak must have been right here — such an adorned land and tempered by nature you won’t be able to come across on the surface of the entire mother-earth!’ every viewer of Abkhazia will say as soon they set eyes on it, but, unfortunately, but what one won’t find here are Eden’s corresponding people. Abkhazia, as the name of the place itself shews us, belonged and belongs to the Abkhazians. It is true, the rolling out of time has on many an occasion ruined and on many an occasion ravaged this country, and incoming peoples have assigned their own names to the places here, but still the basic name for it no-one has been able to eliminate. Abkhazia is a country well known from ancient times. At the time of Jesus Christ’s coming upon the earth Simon the Canaanite apparently came to christianise Abkhazia — that’s the Simon at whose wedding Christ turned the water into wine. As soon as he arrived here, he was sentenced to death by King Aderk’i. This is what history tells us. On the spot where Simon suffered his punishment, following the spread of the christian faith, they raised a church in Simon’s name. Several years passed and the passage of time resulted in the reduction of christianity in Abkhazia and Simon’s church evidently fell into ruin.

Abkhazia, as the name of the place itself shews us, belonged and belongs to the Abkhazians.

In this last period Russian monks requested of the authorities to renew this church and to create on this spot a monastery or wilderness. The authorities granted them permission; in addition the monastery was ceded a patrimonial holding of over 4,000 desiatins. Presently 150 monks reside in the monastery. It was the idea of the monks to pursue missionary work among the people, but all their studiousness proved to be in vain, as the mahometan faith had seemingly so penetrated every fibre of the being of the Abkhazians that rather than abandon it they preferred to abandon their homeland, and in the second half of this century the majority of the Abkhazians relocated to the Ottoman empire. During this last war [sc. the Russo-Turkish war of 1877-78 — trans.] this country was, as we know, almost entirely vacated. The lands formerly occupied by the Abkhazians were parcelled out to all with the necessary desire. This country had a renowned reputation, not to say that of a promised land. Every man who chanced to hear that land was being given away for free upped and moved here, and within 5-6 years Abkhazia was flooded with Greeks, Russians, Bulgarians, Germans, Mingrelians, Imeretians, Armenians and several others — and the authorities refused none. All were given sufficient land. But alas for those taking up such residence! Apart from the Greeks and Imeretian-Mingrelians, their coming here proved to be in vain for all the new-comers. They fell prey to local fevers, and whoever failed to flee home in time gave up the ghost within 2-3 years.

Abkhazia for Caucasians is a compassionate mother, but for others it is a step-mother and an exceptionally evil step-mother too; we know this from experience.

True, anyone who hears this news will be surprised and say to me that this country, far from being a paradise, is apparently akin to hell, but don’t let yourself forget that living here is well possible for any person from this side of the Caucasus — Imeretians, Mingrelians and also Greeks even so — whereas, as far as Germans, Bulgarians or the other peoples are concerned, for those it is impossible to live here. Abkhazia for Caucasians is a compassionate mother, but for others it is a step-mother and an exceptionally evil step-mother too; we know this from experience. Some Russian travellers, writers indeed who earn a wage by the quantity of their lines, yell that profitable locations are not given to peoples resettling here from Europe and this is the reason why they can’t get to grips with it!

So, since it’s difficult to eliminate the aforementioned causes, it will be good that there be no further stepping into the misfortune of those who have come here to make a life and to allow the settling here of only Imeretians, Mingrelians and Greeks, who will put up with living here and also be advantageous to the authorities. 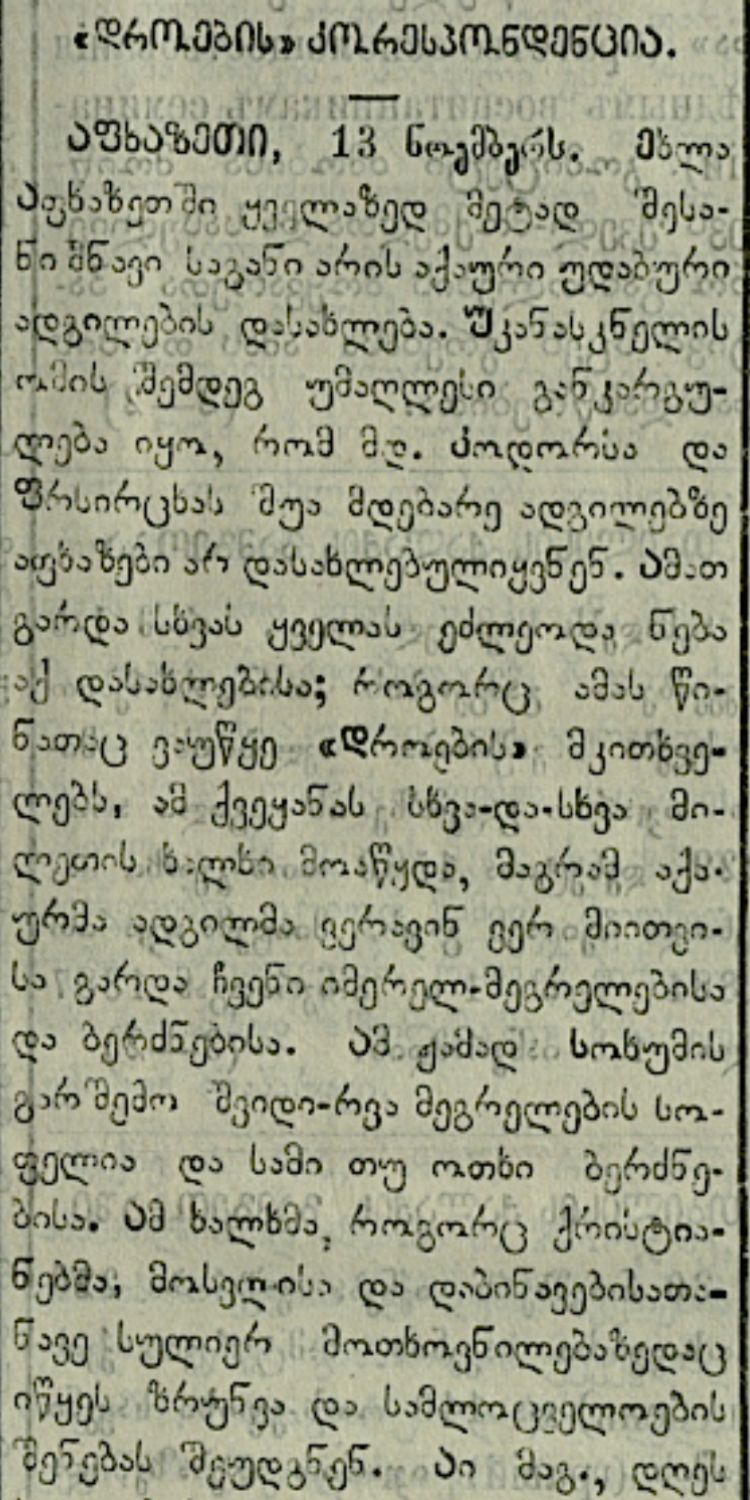 ABKHAZIA, 13 November. Now in Abkhazia the most notable topic is the populating of the uninhabited places here. After the last war [sc. the Russo-Turkish war of 1877-78 — trans.] there was a supreme decree that Abkhazians should not settle on lands between the R. K’odor and Psyrtskha. Apart from these, all others were given permission to settle here; as I recently informed the readers of ‘Droeba’, this territory was subjected to a flood of people of different nations, but the region here failed to suit any apart from our Imeretian-Mingrelians and the Greeks. At the present time around Sukhum there are 7 or 8 Mingrelian and 3 or 4 Greek villages. This people, as christians, as soon as they arrived and became settled began to take care also of their spiritual needs and set about constructing places of worship. 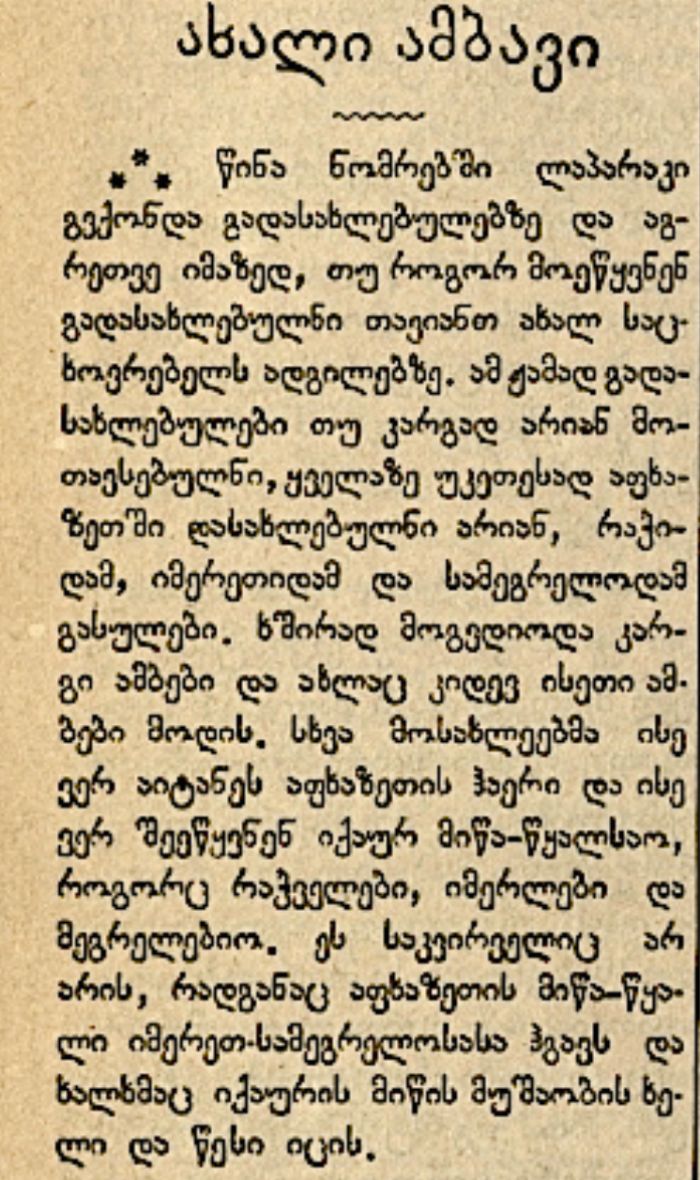 In previous issues we spoke of resettlements and also about how the settlers settled in on their new living spaces. If the resettled are currently well sorted out, the best are those who have taken up residence in Abkhazia, having moved out of Rach’a, Imereti and Mingrelia. We were often receiving favourable reports and now too such reports are again coming in to the effect that the other residents were unable to bear the air of Abkhazia and couldn’t adapt to the land-conditions there in the same way as the Rach’ans, Imeretians and Mingrelians. Neither is this surprising, since the land- conditions of Abkhazia resemble those of Imeretia-Mingrelia, and the people too are familiar with the methods and rules of working the land there.