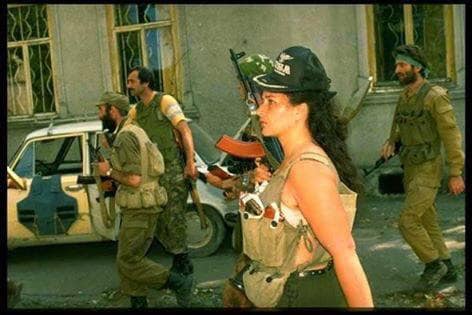 On 27 September 27 1993, during the Sukhum offensive, warrior and medical officer Rita Zongurova came into the lens of eminent photojournalist Andrej Solovëv.

Just a few minutes after taking this shot, Andreо Solovëv died from a sniper bullet at the Council of Ministers; Zongurova tried to give him first aid, but in vain. The photograph of the female warrior in an unloading combat-jacket and holding a Kalashnikov assault-rifle in her hand was one of the last that the photographer managed to take.

The war found Rita Zongurova, who hails from Tkuarchal, in Russia. In August 1992, with her three sons, she crossed the border along the Psou River. The first three months she lived with her children in Pitsunda.

On the home-front, Rita and her sons had to face many problems: hunger, cold and lawlessness, which the looters committed against peaceful civilians.

“In the end, seeing the hungry eyes of my three boys became impossible to tolerate anymore. And when, after the last attack from the “gold-diggers in the rear” (sc. looters), my eldest son, with tears in his eyes, shouted with pain in some hopelessness: ‘Mom, when will it stop ?!’, I quietly packed up and ran to the front. I didn’t know where I was going, but my convictions were clearly formed — to fight against evil. The only thing I regret now is why I didn’t do it earlier, that is, didn’t go to the front,” wrote Rita Zongurova in her diary-notes.

Her mother remained with Rita’s children.

John Dbar, the commander of one of the companies of the Lidzavian battalion, to which Rita came, recalls this moment as follows: “In the autumn, after the assault on Gagra, Rita Zongurova joined us. And in almost all positional battles in the direction of Gumista, she was with us, always rushing forward. Rita stood out for her remarkable fearlessness."

Zongurova came to the front as a medical instructor. But since by that time there was already a nurse in the company, and the company was not supposed to have two, John Dbar wrote her down as a “shooter”.

The company-commander did not want to talk about this newly-fledged medical instructor, but soon Rita herself recognised her combat-status and ventured into conflict.

“She declared: ‘If I’m a shooter, then give me a gun.’ What was to be done? Rita had to be armed. And it soon became clear that as a nurse she was wonderful, but as a shooter she was in no way inferior to men,” recalls John Dbar.

Rita herself in her diary-entries writes that she quietly and unobtrusively slipped into front-line life. At first she was received warily. But this did not last long — literally prior to the first military campaign.

“She was fearless, knowing how to suppress fear and go first. She was always pushing forward. We told her: ‘Rita, we need to pause a bit; allow us the chance to work how and where to go.’ I had to hold her back. She sometimes did such things that they wondered how it was possible for a woman to fight like that. She did everything so competently, as if she had been engaged in military affairs all her life,” the company-commander added. 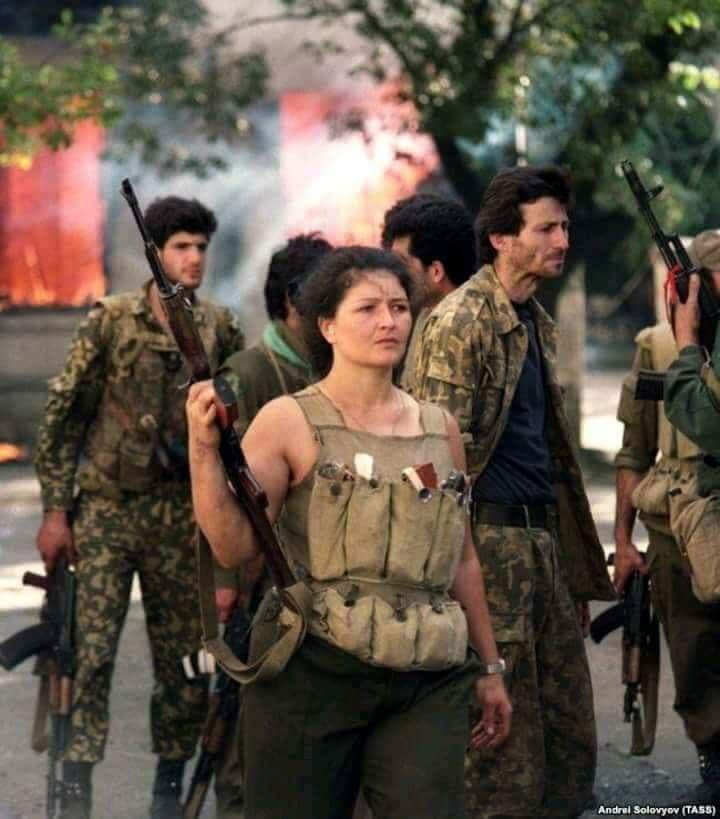 The story of one photo

Rita spent the whole winter on the front line with her comrades.

"The winter of 1993 was harsh, snowy. On the fronts, life ran its own course — confrontation on the Gumista river, shootings —dead lads were brought in; Abkhazia quietly dressed in black and mourned; fists were clenched tighter; the general pain grew and massed into a formidable force," Rita wrote later.

But Rita, along with men, bore all the hardships of war. She and the company went up to Tsugurovka, participated in the battles for Shroma, and went to Sukhum.

In the last attack, Rita Zongurova’s proceded along the central highway from the Gumista bridge towards the Republican Hospital.

“Then we went down to the petrol-station. By the morning of 27 September, the intelligence-service under the leadership of Beslan Gubaz came there; effectively, they had freed the upper part. We then moved forward along the central highway again, freed the railway-station and then turned south from the station towards the sea,” said John Dbar, describing the paths taken by his group. “We proceeded along Kirov Street (now renamed Ardzinba Street - ed.), from where we reached the Council of Ministers’ building, where battles ensued. Rita was very active there."

It was here that Zongurova came into the lens of the famous Russian military photographer Andrej Solovëv, who managed to take several shots of the female warrior in an unloading combat-jacket and with a Kalashnikov in her hand.

These shots became one of the last for Andrej Solovëv. Just a few minutes later Andrej, who was trying to save a woman who ran out into the street with a cry for help, was killed by a Georgian sniper.

“The photo-journalist died right in front of us. Rita Zongurova at once set about bandaging him,” added John Dbar.

Rita Zongurova herself, together with her group, lived to meet the victory. But the life of the female warrior tragically ended after the war, being killed during a family-quarrel. In memory of her there remained the final photographs of Andrej Solovëv and her diary-entries.