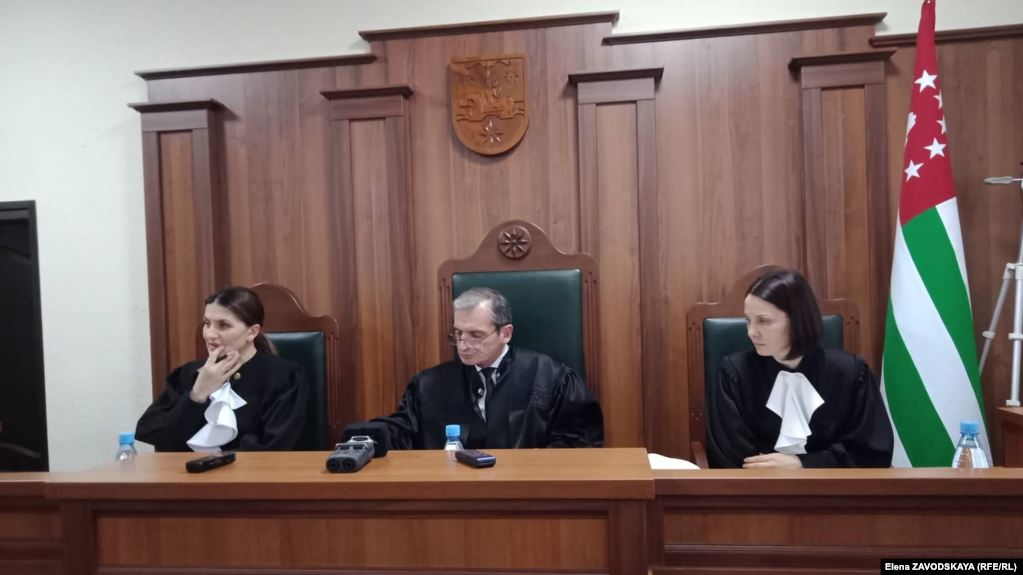 OC-Media -- The Supreme Court of Abkhazia has overturned the results of September’s presidential elections, ordering a rerun of the vote.

The judgement on Friday reversed a previous decision by the court, upholding an appeal by runner-up Alkhas Kvitsiniya that the official results were unlawful as neither candidate won more than 50% of votes.

Khadzhimba has refused to step down despite calls from parliament and opposition groups to do so following the 9 January seizure.

On Friday, Khadzhimba rejected the Supreme Court’s decision and vowed to appeal it. In a statement, the presidential administration warned the ruling could ‘exacerbate the difficult socio-political situation in the country’.

‘The decision was made against the backdrop of pogroms in government buildings, the seizure of the Presidential Administration, and the siege of the Supreme Court building. With such pressure, it cannot be said that the Supreme Court of the Republic of Abkhazia had the conditions necessary to make an objective decision.’

Khadzhimba had responded to the storming of the Presidential Administration on Thursday by holding an emergency meeting of Abkhazia’s Security Council. He announced that he did not rule out introducing a state of emergency.

On Friday, Russia’s Foreign Ministry said the developments were an ‘internal affair’, but added that they were ‘closely following’ the situation.

Protesters stormed and seized the Presidential Administration in Sukhumi on Thursday demanding that the results of the presidential elections be recognised as unlawful.

Hundreds of people had gathered in front of the building in a demonstration organised by opposition parties Amtsakhara and United Abkhazia.

Videos and pictures posted on social media on 9 January showed protesters breaking into the Presidential Administration and damaging furniture inside. The majority of the windows on the ground floor of the building appeared to have been smashed as protesters broke in.

Later that day, Khadzhimba dismissed an appeal by parliament that he voluntarily resign.

He said that parliament’s statement could ‘only complicate the socio-political situation and lead to irreversible consequences for the country’.

He added that in order to maintain stability, he was willing to sit down and negotiate with the opposition.

On 10 January, Russian news agency Interfax quoted Ruslan Khashig, a member of the Public Chamber of Abkhazia, an advisory body of the Presidential Administration,  as saying that Khadzhimba would meet with the opposition.

‘With the mediation of four members of the Public Chamber of Abkhazia, negotiations are beginning between representatives of the opposition and the president of the republic to overcome the political crisis’, he reportedly said.

The Amtsakhara party issued a statement on Friday demanding that ‘threats and intrigues surrounding the lawsuit of the former presidential candidate Alkhas Kvitsiniya be stopped’, and called on the judges to finish deliberating as soon as possible.

It also called on law enforcement agencies not to obey ‘the insane and illegal orders of Khadzhimba, who since 8 September has not been the lawfully elected president’.

In an interview with OC Media, Olesya Vartanyan, an analyst at the International Crisis Group, a peacebuilding organisation, said Abkhazia was embroiled in ‘the most serious crisis in recent years’.

‘There have been many protests over the last two years. but this is the first one in which the oppositions have taken the  serious step of supporting those who managed to take control of governmental buildings.’

‘Before, the same opposition leaders had called only for legal means of changing power, mainly fearing that any destabilisation could provoke open interference from Russia and could eliminate any last signs of sovereignty of the local leadership.’

Vartanyan said she believed this remained a concern for the opposition.

‘Similarly, there is a fear that if any kind of force is used against protestors, this could provoke an open conflict — as you probably know, most of the local population have firearms in their homes and can make use of them.’

‘So I would say that these two factors are clear containers of the current crisis, which force everyone — the oppositions, the leadership, and the protestors — to seek a compromise. What that will be is difficult to say for the moment, we have to watch the ongoing talks and if and how Russian mediation could contribute’, she concluded.

On 8 September, Abkhazia held the second round of presidential elections after none of the nine candidates crossed the 50% threshold required to win in the first round. In the first round on 25 August, Khadzhimba received 25% of the vote while Kvitsiniya came second with 23%.

According to the official results, in the second round, Khadzhimba received 47% of votes, Kvitsiniya received 46%, while the remainder voted ‘against all’, an option on the ballots.

Kvitsiniya, the chair of the opposition Amtsakhara Party, refused to concede after the polls closed. He has questioned the legitimacy of a winner who received ‘less than 50% of votes’.

While Khadzhimba was inaugurated on 9 October, his victory and all his decisions as president thereafter are still being legally disputed.

They insisted that overcoming the ‘political crisis’ in Abkhazia would require moving from a presidential to a parliamentary form of government and adopting a mixed electoral system.

The following day, Khadzhimba appealed to his supporters. He ignored the call for constitutional changes, instead announcing that Kvitsiniya had rejected his offer to be Prime Minister as a way out of the crisis.

Bzhaniya, an Abkhazian MP, was replaced by Kvitsiniya as a candidate for the presidency after he fell suddenly ill and was hospitalised. The timing and seriousness of Bzhaniya’s illness triggered allegations among his supporters that he was poisoned.

Local news outlet Apsny Today quoted Bzhaniya as saying that he had returned from Berlin to Moscow on 13 October and was continuing his recovery there, which he said would last ‘about a month and a half more’.